He was the son of John Gerard Buchanan and Annie Elizabeth Buchanan.

[William Arthur Irvine Buchanan served in the Army Veterinary Corps and was killed in action on 24th July 1917].

By 1911, the family property is described as house 23, Main Street, Fintona, Co. Tyrone.
Buchanan would have joined the Belfast Banking Company around 1916 / 1917.  Buchanan served with the Royal Field Artillery and attained the rank of 2nd Lieutenant.

He saw service in Kingstown, Saintfield and Aughnacloy.  In 1950 he was transferred to Kesh.

The Belfast News Letter of 28th July 1916 reports this of a brother, W A I Buchanan:

The Belfast News Letter of 30th July 1917 reports this of his brother: 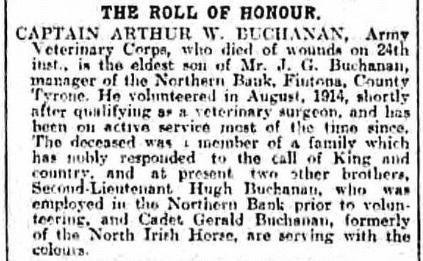 Email ThisBlogThis!Share to TwitterShare to FacebookShare to Pinterest
Labels: Band of Brothers, Belfast Bank, Served, Surnames A to F, The Great War