He was the son of William and Kate MacGrath.  In 1901 the family lived in house 5, Montpelier Parade, Blackrock, Dublin.  William is recorded as being etired from the Bank.
MacGrath would have joined the Belfast Banking Company around 1904 working in Derry and College Green.

By 1911 MacGrath was boarding in house 13, Sandy Street, Newry, Co. Down.  He is described as a Bank Official.
MacGrath served with the 2nd Bn. Royal Irish Regiment and attained the rank of Lieutenant (14th March 1916) and later, Captain.


The Belfast Banking Company 'Roll of Honour' booklet records MacGrath as having been awarded military honours, the Military Cross (MC).  His last known address is recorded as 'in France'. 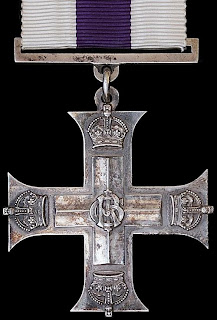