Sergeant Thomas Moffett Donaghy MM
was born on 13th February 1912 and of Presbyterian faith.
On 2nd June 1920 he joined Northern Bank at Head Office.  Transfers followed to Coleraine (1920), Head Office (1920), Knock (1930), Maghera (1931), Oldcastle (1934), Head Office – relief (1938) and Grafton Street – relief (1938).
On 9th January 1940 he joined the North Irish Horse and was ‘Called up’ on 16th January 1940.  His rank on joining was Trooper (Driver mechanic).  Promotions followed to Sergeant.
Donaghy was awarded the Military Medal on 26th April 1945.  The citation reads:
“On November 14th 1944, at map ref 418206 Sergeant Donaghy was Troop Leader of three tanks supporting A Company 6 Black Watch.  His orders were to support A Company in clearing the houses on each side of the road and seizing the T junction 418206.  At the junction several enemy tanks were known to be lying in wait.  One anti-tank gun was known to be sited down the road which had not been swept for mines, and it was impossible to get off the road.  A platoon of 6 Black Watch had managed to reach a house 200 yards short of the objective but were pinned down from Spandau fire from the enemy tanks.  Sergeant Donaghy made a most gallant attempt to get to their assistance.  The only way was straight up the road.  As soon as he moved he came under high-explosive and armour-piercing fire from enemy tanks but continued up the road.  Just before he reached the infantry his tank was hit and knocked out.  Sergeant Donaghy was wounded by blast and splash in the face and could not see out of one eye.  He refused to be evacuated and after dark sufficiently repaired his tank to enable it to be towed to a defensive position for the night.  He accomplished this in spite of intense fixed line Spandau fire down the road.  He manned his tank throughout the night and did not go to hospital until ordered to do so next day.  Sergeant Donaghy’s grim determination at all costs to carry out his task of supporting the infantry and his success in carrying out this task in face of strong opposition and in spite of his own wounds, showed devotion to duty and personal courage which were quite beyond praise.”
On 4th February 1946 he resumed service with the Northern Bank at Head Office.  Transfers followed to Grafton Street – relief (1946), Head Office – relief (1946), Head Office (1947), Lisburn (1948), Head Office (1948), Claudy (1948), Larne (1952), Banbridge (1954), Head Office (1955) and Donegall Square (1956). 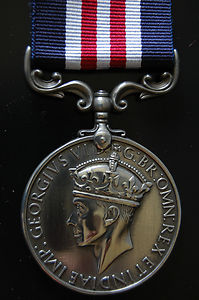