He was the younger son of John Lockhart (Clerk of Petty Sessions at Portrush and Bushmills) and Margaret Lockhart.

In 1911, Margaret Lockhart and her family resided in house 19, Orient Gardens, Cliftonville, Belfast. John has recorded his occupation as a Bank Clerk.

In April 1913, he passed the final examination of the Institute of Bankers, gaining first place in Ireland and third in the United Kingdom.

In September 1914, Lockhart volunteered and enlisted into 'D Squadron’, North Irish Horse and attained the rank of Lance Corporal.  His Service Number is recorded as 1219 with the NIH.  Another number, 71288 is recorded with the Corps of Hussars.

This photograph and article appeared in the Coleraine Chronicle in January 1915: 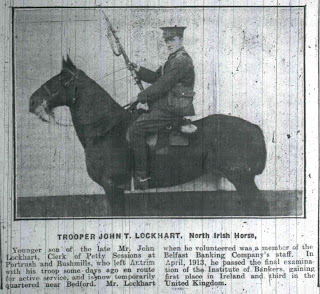 It describes Lockhart as having left Antrim with his troop some time ago en route for active service, and is now temporarily quartered near Bedford.
His Medal Index Card can be accessed here.

The Belfast Banking Company 'Roll of Honour' booklet describes Lockhart as 'being in hospital' with his last known address as Queenstown.

In 1919 he transferred to the Class Z Army Reserrve.
Following his demobilisation after the Great War, Lockhart returned to work eventually ending up as Manager of Londonderry branch.
Retirement came in 1945.
He died on 16th December 1961.