He was the son of Robert Thompson and Martha Walker Thompson.  In 1911 the family were living in house 149, Castlewellan, Co. Down.  Robert Thompson records his occupation as a Bank Manager. In 1901, Robert was a Cashier (Northern Bank) and living in Main Street, Bryansford, Co. Down.

On 1st April 1922 Jackson Thompson joined Northern Bank at Head Office.  His address is recorded as Northern Bank, Downpatrick.  He was of Church of Ireland faith.

In 1939 the Bank gave him permission to join the 9th Anti-Aircraft Regiment, 3rd Anti-Aircraft Brigade, Royal Artillery.  On 2nd September he was ‘Called up on Active Service’ as a Gunner with promotions to Lance Sergeant and Sergeant following.

J H Thomson (sp) is mentioned in this newspaper article from 1966 re the opening of a new branch at 10 High Street, Belfast. 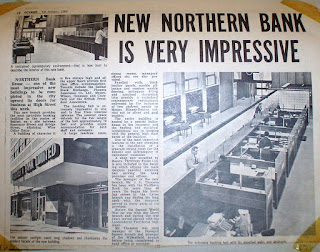