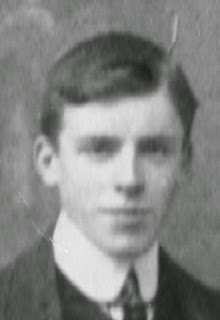 
The Gunning children grew up in Enniskillen with a love of sport, especially rugby, and, living by the lake, were accomplished swimmers and oarsmen.

All four brothers joined up at the outbreak of war in 1914.  Jack went into the Navy, Cecil and Douglas into the army,  Willie into the Royal Navy Reserve.  Their young sister Kathleen remained with her parents.

Cecil and Douglas, then aged 21 and 19 left jobs in the bank to join up. Douglas, then working in Sligo, cycled fifty miles on an old pushbike to be in time to join up with his elder brother in ’D’ Company, Royal Dublin Fusiliers.

Immortalized as the ’Pals’ it consisted mainly, though not exclusively, of young professional men, many from Dublin, all sharing a strong pride in their Irishness.  Referred to as ‘The Footballers’, many of them were bound by a passion for rugby - a large element had formed up on the rugby pitch at Lansdowne Road to volunteer.  On a point of honour, most declined commissions, choosing to serve as squaddies.  Because the Dublin Fusiliers - ’Dubs’ for short had a reputation for toughness, ‘D’ company was wittily dismissed as the ‘Toffs among the Tuffs’.  History would prove otherwise.

After training at the Curragh and Basingstoke, the two Enniskillen brothers set sail with the 7th Battalion the Royal Dublin Fusiliers for Gallipoli.  They kept a diary of their experiences, part 1 written day-about by Cecil and Douglas on the month long outward voyage, part 2 by Douglas after being invalided home.  Fused with excitement, the outward journal reads like a Boys Own adventure.

Saturday 10th July saw us steam out of Plymouth in up-beat mood aboard the Alaunia. ‘D’ company were stuck at the bottom of the boat, but-good food, salt water baths and sea air had already combined to make us feel fit.

Each day began with a run at-the-double round the deck.  They relished the luxury of ice-cold oranges from the refrigerator, took part in swimming races, witnessed splendid sunsets and saw porpoises swimming by moonlight.  Typical of the close camaraderie among the ‘Pals’ Battalion the two brothers and their best friend Guy feature in the diary under their nicknames Golly, Mollie and Gertie. 13 platoon quickly developed a reputation for schoolboy-like rascality.

The voyage opened up a whole new world - one highlight was a route march round the magnificent harbour at Alexandria, the ‘Dubs’ taking their leave with a rousing rendering of ‘Tipperary’.

However, the sight of Red Cross boats returning from the Dardanelles full of wounded soldiers gave a hint of what was to come.

The 7th Battalion landed at Suvla Bay on 7th August 1915. Provided neither with maps nor clear orders, their artillery guns sent to France by mistake, they arrived to a barrage of Turkish fire from the towering heights above the bay. On those slopes, ‘D’ Company - the ‘Pals’- would earn a lasting reputation for bravery, but at a terrible cost: of its 239 men who landed, only 79 remained after 8 weeks.

At 4 a.m. I awoke off the Gallipoli coast.  We could hear the boom boom and see the flash from Turkish guns coming from the big ridge of mountains, shells bursting, our men landing from the lighters and stretcher bearers bringing down and collecting wounded on the beach.  The whole bay was quivering with the vibration.  Mind you, just before this, Gertie and Mollie had been up playing a little tune on the small piano in the saloon - I’m sure that was quite a unique event to have occurred in the Gallipoli campaign.

Somehow, we got on to the beach safely. It was remarkable how quickly you got used to it and soon we never bothered ducking unless the shell was quite close.  I must say the discipline stood to us marvelously, for we were more or less stupefied.

We got on past stretcher bearers, wounded, dying and dead, and arrived at a long strand, shells dropping, men groaning and the medical corps bandaging like fury. We lay like sardines under the cliff. The Inniskillings were there also and who was with them only our uncle Captain Bob Stevenson from Moygashel!

After one frightening near miss, the brothers separated to minimize the chance they would both be killed.

Respite came at nightfall, as the Turks were, for the moment, driven back over the summit.

We were so tired; some of us didn’t eat as much as a biscuit or take a sup of water.  It was absolutely miserable in the dark to hear the moaning of the wounded and dying, both of our own brave men and the Turks.  I slept for an hour and woke, my teeth and knees shivering cold.

Despite the efforts of a human chain passing buckets up and down the mountainside, thirst soon became a torture.  Nearby was a big lake of dry salt for all the world like frozen snow.  The hot air rises off it in the daytime and you could see a rim of white scum formed on our lips by it.  In this state, you could drink anything and it was a maddening thirst,  I’m sure, that helped me to get dysentery.  After a few days, the wells dried up we were drinking mud and gravel as well; our teeth used to be black with the dirty water.

Reunited during a lull in the battle, the trio, Golly and Mollie and Gertie exchanged experiences and shared a ‘gloriously sweet’ tin of condensed milk. Someone had found the body of a young Turkish girl sniper with fourteen chilling trophies round her neck - identification tags mostly from the Munster Fusiliers. Another find was a bag of clothes: they all bagged a Turkish waistcoat and one joker put on a Fez and peeped into the next trench for a bit of crack!

Anything that brought a bit of cheer helped to alleviate the sense of horror: Responding to the constant call for stretcher bearers, there to the fore would come their good-humoured friend Fatty Clements, a clergyman’s son from Moira, leading the way with a broad grin on his face.

Day after night passed in a blur of exhaustion: Just when they thought they were going to base for a rest, they were ordered to undertake a five hour hike to reach the beach where they had landed. Stumbling over make-shift burial mounds in the dark, the two brothers found each other again and slept for two hours under a rock.  Rubbing sand over their bodies to remove the dirt, they surveyed the scene: shells bursting, mules shifting supplies, a steamer condensing seawater into fresh.  Then, off up the slopes again. It was exhausting carrying dixies of water, then having to dig themselves in.

A mailbag from home brought a letter that made them terribly home sick.  Also enclosed was the Punch Summer Annual

I thought it awfully tragic for people at home to be laughing over such silly things while we were in a game of life and death. Sunday.  Our hope of sharing divine service with our Catholic friends and good old Father Murphy, vanished before dawn as we came under Turkish shell fire that lasted all day.  At one point, a cheer went up in front - the gallant Munsters had taken a ridge of trenches at bayonet point and were yelling like madmen.

Often, the men in the front line were to be seen catching the bombs and throwing them back but their heroism was never recorded because their officers were practically all killed.  The brothers witnessed terrible woundings, but actually only a third of casualties at Gallipoli were due to injuries: the rest contracted illnesses caused by extremes of heat and cold, plagues of flies and lack of clean water.

That evening we sat looking at the sun setting in the west and thinking of home. Although we couldn’t, I’m sure a ‘blub’ would have made us feel better.’

Next day, Douglas felt the symptoms of dysentery and joined the line of men being sent down to the field hospital. - a rough and rocky journey.  In daylight, they were brought down to the beach and labeled like parcels.  They lay under a shelter until put on board the Alaunia - now refitted as a hospital ship accommodating 2,000 cases.  The attention of nurses and luxuries like hot milk brought comfort and as he improved, Douglas helped the hard-pressed medics.  There were 68 burials at sea.

Back in London, Douglas spent a week in hospital, but, determined to get back to Ireland, he discharged himself.

I was up since dawn for a first glimpse of Ireland, then to Enniskillen to my dear, dear Father and Mother who met me at the station with open arms.

Just weeks later, Douglas helped shoulder the coffin at his father’s funeral. Cecil was still far from home, by then invalided to a hospital in Alexandria.

To the distress of the family and against medical advice - for he was still traumatized - Douglas answered the appeal for trainee officers and took a commission as a sub lieutenant in the 6th Inniskillings.  They left for France on 16th June 1916.

Writing two days later to his mother, Douglas assured her:

As long as I left you without any tears, dear, my heart did not ache. I did feel proud at Charing Cross to be one of that noble lot going out.

On 30th June, the eve of the battle of the Somme, he wrote:

Dearest,Well, here I am in the thick of it all and talk about Suvla Bay, why this is a thousand times worse. The noise would put you astray in the head. For the sake of us all, pray for a speedy and victorious peace. Mizpah.

The next communication came from the War Office:

Deeply regret to inform you that your son is reported missing, believed killed in action, 1st July.

According to the official citation, Douglas was leading the Enniskillen platoon when a bullet took off one of his fingers. As he was binding it up, his men urged him to go back to the dressing station. Insisting that his place was with them, he refused and went on until a shell extinguished his bright and noble spirit.

Douglas’s name appears on the Thiepval memorial along with those of more than 72,000 men who died at the Somme and have no known grave.

Cecil survived to resume his career in banking. He talked little of his experiences, but retained a strong dislike of barbed wire.