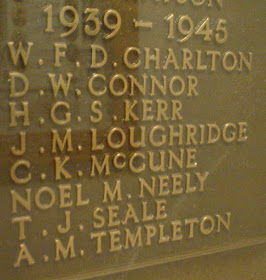 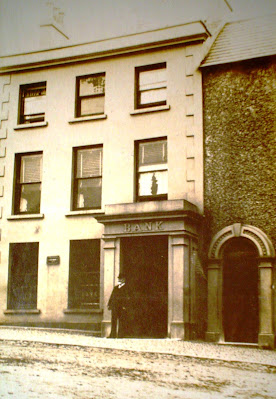 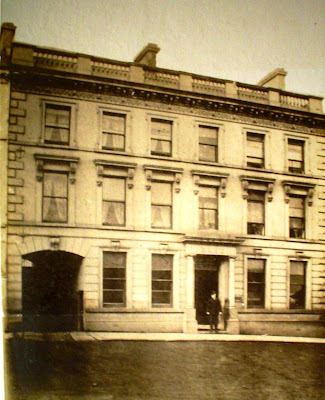 Belfast Bank - Bankers Guarantee ledger sheet
The Belfast Telegraph of 15th January 1940 carried a report about the inquest into a man who had been killed in a level-crossing accident between Lurgan and Portadown. Miss Moire [sic] Seale, a member of the A.T.S. told the reporter that there was no panic amongst the passengers.
Theo volunteered and enlisted into the Royal Irish Fusiliers and later promoted to Lieutenant with Service Number 268965.
The Northern Whig of 2nd July 1941 reported that 'Mr and Mrs W P Seale, Belfast Bank, Portadown have been informed that their eldest son Sqn Leader Terence Seale, is reported missing'. See later.
The Portadown News of 24th January 1942 reports that L/C (L/Cpl) T J Seale has received a parcel from home, 'with many thanks'.
Theo was serving with the Royal Irish Fusiliers, Royal Ulster Rifles; attached 1st (Airborne) Bn., when he was killed on 1st June 1944 aged 23. The Portadown News of 10 June 1944 reports that Theo had been working in the Belfast Bank, Enniskillen branch. 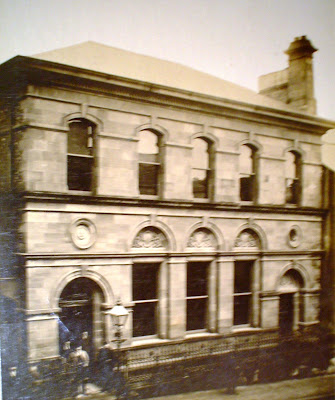 Belfast Bank, Enniskillen branch
The Official War Diary of the 1st Bn. Royal Ulster Rifles (1944 to 1945) records Seale was killed with 1 other soldier.
See below for excerpts from the War Diary - WARNING - GRAPHIC.
Theo is buried in Oxford (Botley) Cemetery, Oxfordshire, England. 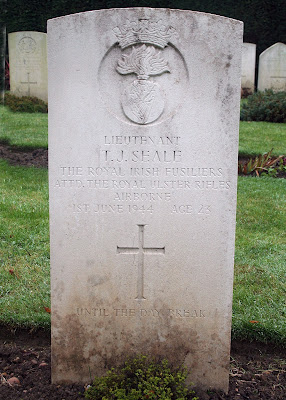 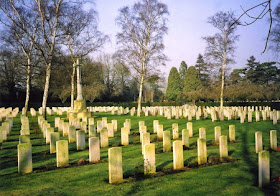 Theo's brother, Squadron Leader Terry Seale from Portadown College was killed in action on 30th June 1941 whilst serving in the RAF. He had joined the RAF in 1935. 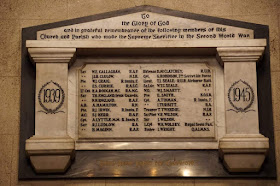 The above memorial is from St Marks Church, Lurgan.

The Portadown News of 1st September 1945 reports that Junior Commander Moira Seale (A. T. S.) is a Staff Officer working in Berlin.
See below for excerpts from the War Diary - WARNING - GRAPHIC

Within the page, Seale is mentioned a few times. An unedited except follows (GRAPHIC).


Our spell at Broadwell was marred by a tragic accident, which caused the death of an officer and a sergeant, and injuries, some serious, to a Company Commander and a number of others. This happened on the 1st June. At the time, I was sitting in the Briefing Hut attending to some Battalion Headquarter business, when I heard a loud thump somewhere in the vicinity. I got up and walked to the door and looking out saw a large cloud of black smoke rising above one of the tents about 50 yards from where I was standing. Obviously there had been some form of explosion, so I called out to Corporal Hooper who was in the hut with me no~ to leave the hut unattended, and hurried across to the lines of tents from where the smoke was still rising. As I approached I heard the Regimental Sergeant Major, RSL Griffiths, shouting, "keep clear", "keep clear", and then saw a number of bodies lying near a tent which was badly torn and smoking in several places. Two of the recumbent bodies were obviously badly mutilated, but I could recognise Lieutenant Theo.Seale, a Platoon Commander, and his Platoon Sergeant, Sgt.Dwyer. Almost immediately Captain Rees, the Medical Officer, arrived, and despite the obvious risk to his own safety, walked up to the body of Sgt. Dwyer and kneeling down placed his fingers on Dwyer's neck to check his pulse. After a moment he walked the few paces to Theo. Seale and did the same, then call over two stretcher bearers who were being restrained by the RSM. He then stood up and turning to me said that Dwyer was dead. Theo Seale was still alive but he didn’t give much for his chances. By this time, several others who were wounded were being carried or helped away from the scene, and the RSM was leading a small group combing the area for detonators.

A particular problem was the disposal of a number of grenades scattered near the point of the explosion and the uncertainty as to whether they had been primed and in which case made sensitive by the blast. Not without considerable risk to the men involved, these were collected and removed by the Pioneer Platoon for disposal by controlled explosion at a safe place away from the tented area. The body of Sergeant Dwyer and al the injured personnel were taken by Military ambulance to a special security wing established at a hospital, I believe in Oxford. The injured included Major Tom Warner, the Commander of "B" Company. The next day we beard that Theo Seal. had died, and replacements for all our casualties arrived from our Reinforcement Company at Bulford. Although the deaths of’ two popular and capable members of the battalion was deeply regretted by everyone, particularly the circumstances of their deaths, the morale of the troops was in no way diminished; if anything, the opposite. The loss of friends had to be expected in the days ahead, but was something for which the Germans would have to pay a heavy price. From statements made by witnesses, there was little doubt as to the cause of the accident. Theo Seale together with Sergeant Dwyer and several other men of the platoon had been priming their grenades, including what were known as "75" anti—tank grenades. These were metal box—like weapons about the size of a brick, which were primed by sliding a detonator into an aperture on one side so that when pressure was applied, the detonator fired and exploded the grenade. Sergeant Dwyer had been squatting on his haunches at the time. After priming a grenade, he had pushed it behind himself, and reached for another. As he did so, he overbalanced and sat on the first grenade causing it to explode, with fatal results for himself and his platoon commander.

I felt particularly sad about Theo Seale who I had known since my time in the Regimental Depot at Ballymena in 1940. He had joined the Regiment as a Volunteer and had quickly been identified as a potential officer and placed in the Cadet Platoon. His sister was an officer in the ATS at the Depot, and I could only reflect sadly on the tragic telegram which his parents in Portadown would shortly receive. The incident presented me with a problem. Had the deaths and injuries taken place "On Active Service" or "In Action"~, and on the answer to that question depended the reporting procedure I had to follow, as Adjutant of the battalion. If a fatal accident occurred whilst on training in England, it was treated as "Killed on Active Service". On the other hand, if a man was accidentally killed whilst in contact with and preparing to attack the enemy, in would be treated as "Killed In Action". Fortunately, a visit by the Brigade Major, Major Crookendon, resulted in a decision that there would be no Court of Enquiry, as would have been the case if a man had been killed on training, and that the fatalities had occurred "In Action". I n other words, an Airborne soldier, whether parachutist or glider borne, could be construed as in contact with the enemy when preparing to set off on his approach flight which might start a hundred miles or more from the actual point of battle.